Based on the Central Indian Ocean (CIO) mode, this research proposed that the TC genesis locations are found to shift northward in the Bay of Bengal (BoB) due to the intraseasonal CIO mode. The results are expected to contribute to a comprehensive understanding of the relations between TCs and intraseasonal variabilities. 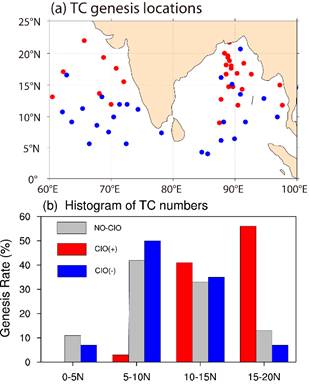 In this study, the impacts of the CIO mode on TC genesis over the NIO are examined. The results show that the TC genesis locations have a clear northward shift from the tropical Indian Ocean to the northern BoB during the positive phase of the CIO mode. As illustrated in Fig. 2, the dynamical and thermodynamical environments modified by the positive CIO mode are favorable for TC genesis over the northern BoB, including the positive vorticity and convergence in the lower troposphere, strong updraft and enhanced humidity in the mid-troposphere. Moreover, the distinguished horizontal gradients of background zonal winds, accompanied with the vorticity and convergence, lead to barotropic energy conversion and provide EKE to TC genesis. During the negative phase of the CIO mode, convection center is near the equator. Atmospheric and oceanic environments are favorable for TC genesis, such as large vorticity and warm SST anomalies. But they are close to the equator. As a result, TC genesis is not significantly enhanced near the equator. Correspondingly, the TC genesis locations are similar to the normal situation. Due to the northward shift of the TC genesis locations during the positive phase of the CIO mode, more TCs tend to make landfalls on the northern rim of the BoB and may cause dramatic damages in the heavily populated region. 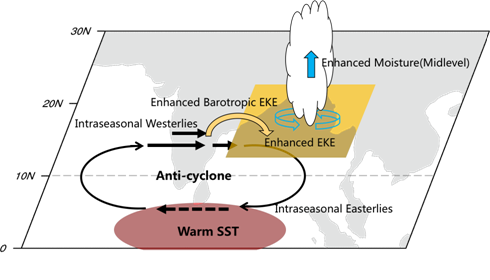 Figure 2 Sketch for the positive phase of the CIO mode.

Baosheng Li is a PhD Candidate in the School of Oceanography at the Shanghai Jiao Tong University and majors in tropical ocean-atmosphere interactions and intraseasonal variabilities. Baosheng Li has published 10 articles and 4 articles (SCI) as first author.

JGR: Atmospheres publishes original research articles that advance and improve the understanding of atmospheric properties and processes, including the interaction of the atmosphere with other components of the Earth system, as well as their roles in climate variability and change. IF=3.63